Meet the winning team members of the Stop Hunger Challenge and discover the key to their success. 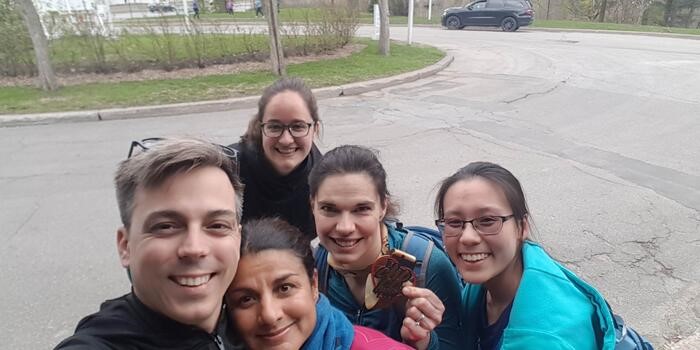 Thanks to their perseverance, their discipline, and their team spirit, Allez Hop, made up of 6 employees from the Quebec healthcare sector: Maryse Fournier, Jean-François Blouin, Rosa-Isabel Heran, Jayciel-Micaiah Licup, Marie-Josée Beaupré and their captain Christiane Azzi, emerged as the grand champions of the Stop Hunger Challenge. To find out more about the key to their success, Stop Hunger wanted to talk to the members of this great team who were able to surprise us until the very end.

We are individually super competitive people. We encouraged each other to try to beat each other. Plus, we were already doing physical activity as a group year-round

It was really about balancing the donations with the physical activity. We also often looked at each other's results and tried to outdo each other.

It is certain that Christiane's gifts have helped a lot. However, we put a lot of effort into taking steps together, even on vacation.

The team spirit, no doubt.  However, it was also nice to be able to convert the multiple activities we did into steps. It made it more accessible to everyone.

One of our team members unfortunately broke his foot at the very beginning of the challenge. However, we are very proud of him because he still managed to walk 382,000 steps.

During the competition, Allez Hop also raised a total of $3,692 for the Stop Hunger Foundation. Since the team was also crowned grand champion of the competition, Stop Hunger will donate the amount raised to the organization of its choice: the Montreal Diet Dispensary, an organization whose mission is to intervene through social nutrition with pregnant women in vulnerable situations to promote optimal infant health, one pregnant woman, one infant and one family at a time.

Congratulations to the entire team for your dedication !